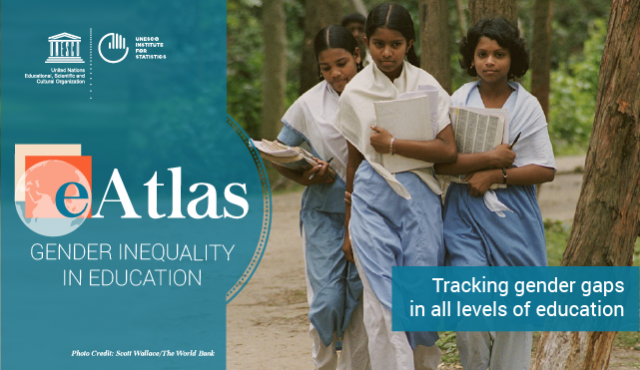 To mark International Women’s Day 2017 (March 8), the UNESCO Institute for Statistics (UIS) is launching a new edition of the eAtlas of Gender Inequality in Education to show where girls and women are making progress and where they are being left behind at every level of education. A series of interactive maps and charts bring to life an extraordinary range of data for about 200 countries produced by the UIS, which is the official data source for the global goal on education.

The eAtlas is an indispensable resource in efforts to eliminate gender disparities by 2030 as part of the Sustainable Development Goals, putting data in the hands of policymakers, activists and engaged citizens striving to take down the barriers that prevent girls and women from tapping into the transformative power of education.

Despite all the efforts and progress made over the past two decades, girls are still more likely than boys to remain completely excluded from education. According to UIS data, 15 million girls roughly between the ages of 6 and 10 will never set foot in a classroom compared to about 10 million boys if current trends continue.

The eAtlas shows the trouble spots where girls struggle to start school. In Afghanistan and Sudan, there are only about 70 girls enrolled in primary school for every 100 boys while large gaps persist in countries like Chad (77 girls for 100 boys), Yemen (84 girls) and Pakistan (85 girls).  Moreover, the gaps tend to widen with higher levels of education in many countries.

The good news is that girls who do manage to enrol tend to persist even if they must repeat grades. The same number – 14 million – of boys and girls enrolled in primary education repeated a grade in 2014, according to the eAtlas. However, about 20 million boys left school that year compared to about 17 million girls.

Looking at regional trends over time, remarkable progress has been made in Southern Asia, where a girl starting school today can expect to receive 11 years of education compared to 6 years in 1990. In contrast, a girl in sub-Saharan African can only expect to receive about 9 years of schooling while boys can expect 10 years (including some time spent repeating grades).

Numerous studies show the positive effects that female teachers can have on girls’ learning. Yet the region facing the greatest challenges – sub-Saharan Africa – is the only one to have mostly men teaching. In countries like Liberia only 13% of primary school teachers are women while more than half of girls are out of school.

The data also underscore the need to encourage girls and women to pursue the highest levels of education. Considerable progress has been made, with the balance tipping in favour of young women in many middle- and high-income countries. But these trends need a closer look. While there are now more women pursuing Bachelor's degrees globally than men, data show the persistence of gender barriers in advanced levels of study, which result in women accounting for less than 30% of the world’s researchers.

The UNESCO eAtlas on Gender Inequalities puts these data at the fingertips of education advocates and policymakers to help ensure that girls and women benefit fully from the promises of the Sustainable Development Goals.