New figures on the number of children out of school worldwide reveal that, despite decades of efforts to get every child into the classroom, progress has come to a standstill. According to data from the UNESCO Institute for Statistics (UIS), about 263 million children, adolescents and youth worldwide (or one in every five) are out school – a figure that has barely changed over the past five years. 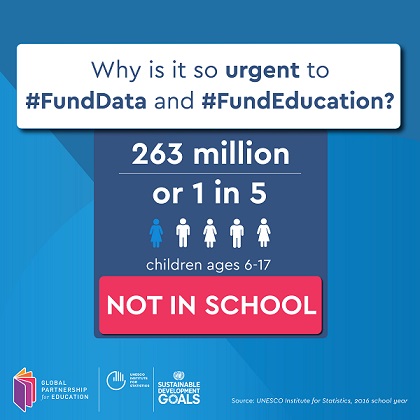 The UIS figures confirm that across sub-Saharan Africa one in every three children, adolescents and youth are out of school - with girls more likely to be excluded than boys. For every 100 boys of primary school age out of school, there are 123 girls denied the right to education.

According to UIS Director, Silvia Montoya, “Access to education is only part of the picture. We also have a learning crisis, with one in six children and adolescents not reaching minimum proficiency levels in reading or mathematics – the majority of them are in school. Education has to deliver for every child, which requires effective monitoring to ensure that all children are in school and that they are learning what they need to know. That is why the UIS, which is the official data source for SDG 4, is developing new indicators on equitable education and learning outcomes.”

The out-of-school numbers and rates are part of a major UIS data release for the 2016 reference year for all levels of education – from early childhood educational development programmes to tertiary and adult education.

In total, the UIS is releasing about 6,000 variables and indicators as well as historical time series and regional averages on a range of issues, such as access, participation and completion by education level, learning outcomes, equity, teachers and education financing. Population-based indicators, such as out-of-school children and enrolment rates, have been revised for all years using the 2017 Revision of World Population Prospects of the United Nations Population Division.

The release includes updated data for 29 global and thematic indicators to monitor progress towards SDG 4. As the official source of SDG 4 data, the UIS is developing methodologies for new indicators by working with countries and partners, especially through the Technical Cooperation Group on SDG 4 – Education 2030 Indicators (TCG) and the Global Alliance to Monitor Learning (GAML).

The UIS has also made it a priority to improve the coverage and availability of SDG 4 data. For example, data are now available for about 70 countries for indicator 4.a.1, the proportion of schools with access to (a) electricity; (b) the Internet for pedagogical purposes; (c) computers for pedagogical purposes; (d) adapted infrastructure and materials for students with disabilities; (e) basic drinking water; (f) single-sex basic sanitation facilities; and (g) basic handwashing facilities. Previously, the UIS collected these data just from countries in Africa as part of a regional survey.

UIS education data are featured in a wide range of flagship publications and databases, such as the World Development Indicators (World Bank), the State of the World’s Children (UNICEF), the Global Education Monitoring Report (UNESCO), the SDG Progress Report (United Nations Statistics Division), and many others.

UIS Data Centre: explore and download the latest available data on education. Users can browse through the complete set of indicators or more segmented views of SDG 4 indicators.

SDG 4 data microsite: explore the indicators, metadata and country profiles on the global and thematic indicators.

eAtlas for Education 2030: interactive maps make it easy to explore the global and thematic indicators and see the trends at the global, regional and country levels.

One in Five Children, Adolescents and Youth is Out of School