By Silvia Montoya, Director of the UNESCO Institute for Statistics (UIS)
This blog was also published by ONE

Persons with disabilities are among the most marginalised groups in any society. Many face daily discrimination in the form of negative or even hostile attitudes and are often excluded from their fundamental human rights by poor policy choices and lack of specialised services and support. For children with disabilities, this exclusion can include the denial of the basic right to a quality education.

This matters because their wellbeing is a key barometer for progress towards the Sustainable Development Goals (SDGs), with their emphasis on equity and on ensuring that nobody is left behind. However, hard evidence on the educational disparities linked to disability has long been marred by a lack of reliable and comparable data.

One problem has been the ‘invisibility’ of children with disabilities, with many thought to be undiagnosed, hidden at home or consigned to ‘special’ schools and, therefore, missing from mainstream education statistics. As a result, we are not even sure of their number. Some estimates suggest there are at least 93 million children with disabilities worldwide but the numbers could be much, much higher, according to UNICEF. Without this basic knowledge, it is so harder to estimate their educational status.

However, a new paper from the UNESCO Institute for Statistics (UIS) is a step in the right direction, as the first in-depth analysis of the available data across 49 countries. Education and Disability sets out what we know – and what we don’t – about this challenge. 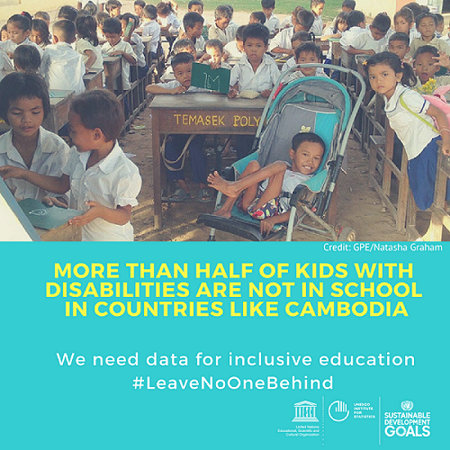 Not surprisingly, there are caveats around the analysis due to the quality of the data. Cross-national comparability of the data is limited because, for example, not all national surveys and censuses used the standard set of questions developed by the Washington Group on Disability Statistics (WG) and UNICEF to identify adults and children with disabilities. Nevertheless, the analysis provides a good overview of inequalities linked to disability and the gaps that must be overcome to achieve equity in education.

The analysis examined five education indicators based on data from three sources, collected between 2005 and 2015: Demographic and Health Surveys (DHS) sponsored by USAID, School-to-Work Transition Surveys (SWTS) by ILO, and population census data compiled by IPUMS-International.

Mean years of schooling is the number of completed years of formal education at the primary level or higher, not counting years spent repeating individual grades. On average across the 22 countries and territories with data, people aged 25 years and older without disabilities have 7 years of schooling, compared with 4.8 years for those with disabilities. 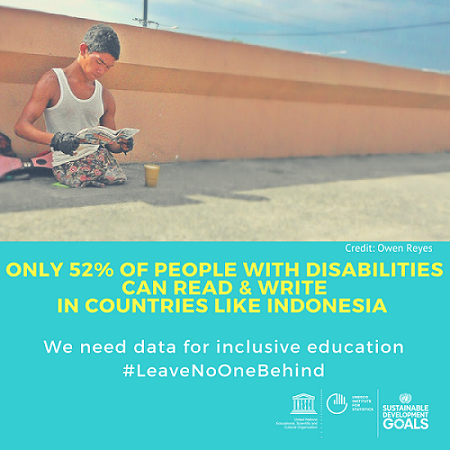 The analysis calls for greater efforts to improve the evidence base for future analytical work and for policy guidance in support of efforts to achieve SDG 4. Its recommendations include a comprehensive inventory of all the data currently available to establish national baselines for SDG 4 monitoring on disability and a call for more widespread use of the questions developed by the Washington Group and UNICEF to identify adults and children with disabilities. The analysis also calls for improvements in the availability of internationally-comparable data on disability, education and other areas through the compilation and standardisation of data collected in past and future surveys, following internationally-agreed standards.

These recommendations require additional funding from international donors and foundations. With greater support, all stakeholders can work together to better identify and reach disadvantaged people through more targeted policies and efficient allocation of resources to provide equitable educational opportunities for all.