By Silvia Montoya, Director of the UNESCO Institute for Statistics (UIS), and Karen Mundy, Chief Technical Officer at the Global Partnership for Education (GPE) 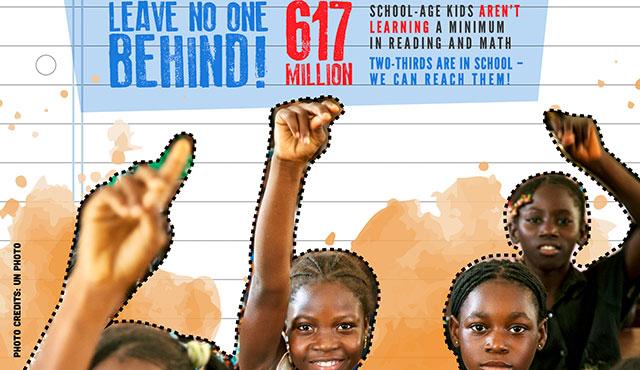 New data released today by the UNESCO Institute for Statistics (UIS) show that 617 million children and adolescents worldwide are not reaching minimum proficiency levels in reading and mathematics. This signals a learning crisis that could threaten progress towards the Sustainable Development Goals (SDGs).

The numbers are vast: the equivalent of three times the population of Brazil being unable to read or handle mathematics with proficiency. Such a waste of human potential tells us that getting children into the classroom is only half the battle. Now the challenge is to ensure that every child in that classroom is learning the basic skills they need in reading and mathematics, as a minimum.

Sub-Saharan Africa has the single largest number – 202 million – of children and adolescents who are not learning. Across the region, nearly nine out of ten kids between the ages of about 6 and 14 will not meet minimum proficiency levels in reading and mathematics. Central and Southern Asia has the second-highest rate, with 81% or 241 million not learning. The numbers and rates are also high in Western Asia and Northern Africa (46 million or 57% of the school-age population) and Eastern Asia and South-Eastern Asia (78 million or 31%).

The data suggest that the new numbers are rooted in three common problems. First, lack of access, with children who are out of school having little or no chance to reach a minimum proficiency level. Second, a failure to retain every child in school and keep them on track. And third, the issue of education quality and what is happening within the classroom itself.

The new UIS estimates on learning include children and adolescents in school and out. What is most surprising – even alarming – is that two-thirds of the kids who are not learning are in fact in school. Of the 387 million primary school-age children unable to read proficiently, 262 million (or 68%) are in school. There are also about 137 million adolescents of lower secondary school age unable to read proficiently even though they are in school.

While the figures are staggering, they show the way forward. We know where these children live and go to school. They are not hidden or isolated from their governments and communities – they are sitting in classrooms with their own aspirations and potential. We can reach these children but not by simply hoping that they stay in school and grasp the basics. We must understand their needs and address the shortcomings of the education currently on offer.

This will require commitment and resources but also a new approach to improving the quality of education. This can only happen with data – which is why the UIS is working so closely with countries and partners like the Global Partnership for Education to help them explore the options and move forward.

The new data are the very first to be gathered on progress towards SDG Target 4.1., which requires primary and secondary education that lead to ‘relevant and effective learning outcomes’.

A snapshot of learning worldwide

The new estimates offer a snapshot of the global learning situation and the crises brewing in different regions. Clearly, we are just at the start of a highly technical and political process needed to define the benchmarks and develop the tools needed to monitor and achieve SDG 4. These issues are discussed in the paper and will be more closely explored in upcoming blogs.

But without these new UIS estimates, we would have no clue that so many millions of children are not learning what they need to know, even those who have spent years in school. It is, in essence, a wake-up call for far greater – and urgent – investment in the quality of education.

This blog was also published by the Global Partnership for Education.