Focus on our SDG 4 Data Digest Partners: The OECD Launches PISA for Development

The new edition of the SDG 4 Data Digest illustrates the range of partners working with the UNESCO Institute for Statistics (UIS) to help countries produce and use assessment data to strengthen lifelong learning. This blog highlights the work of one of these vital partners: the Organisation for Economic Co-operation and Development (OECD), which has just announced the first results from its PISA for Development (PISA-D) initiative. PISA-D builds on the OECD’s long-running Programme for International Student Assessment to assess learning in low- and middle-income countries.

For almost two decades, the world’s wealthier nations have tracked the learning achievements of their 15-year-olds through the OECD’s Programme for International Student Assessment (PISA). Every three years, national PISA scores in reading, mathematics and science hit the headlines and fuel debate about the quality of education systems across the globe. As one of the world’s most rigorous learning assessments, PISA provides a picture of progress, demonstrating that education systems can – and do – improve over time.

We entered a new era this week, with the release of the first results from PISA for Development (PISA-D), which makes the programme more relevant to a larger and more diverse set of countries, including a growing number of low- and middle-income countries. This marks a crucial step toward compiling the global, comparable data we need to monitor progress toward the United Nations Sustainable Development Goal 4 (SDG 4), which calls for a quality education for all. Given the critical importance of such data to support lifelong learning, we were delighted to highlight PISA-D in the latest issue of the SDG 4 Data Digest from the UNESCO Institute for Statistics (UIS).

As shown in the Digest, the learning divide between the richest and poorest countries is one of the world’s greatest development disparities. Learning is at the heart of the SDGs, from ending poverty to the creation of peaceful and just societies – all of which require literate and numerate populations.

The global learning divide between rich and poor countries is actually wider than the national divides we so often see between rich and poor children in low-income countries. A child may be lucky enough to come from a privileged family and attend a well-equipped school with qualified teachers; but if they live in a low-income country, it’s likely that their learning levels will still lag behind those of the average child in an OECD country.

The new school-based results represent a commitment from seven trailblazing countries: Cambodia, Ecuador, Guatemala, Honduras, Paraguay, Senegal and Zambia. These countries have committed to compiling the comparable data they need to track learning over time. Many countries decided to join PISA-D shortly after introducing compulsory education until the age of 15.

There is some encouraging news in the school-based results: most countries performed better than expected, given their relatively low GDP. But there is still much to be done to catch up with higher-income countries.

In OECD countries, only 20% of children do not achieve minimum proficiency in reading, mathematics and science. But the proportions are reversed in low- and middle-income countries, where only 20% of children achieve minimum proficiency. For vulnerable, marginalised and disadvantaged children, the odds of gaining the minimal skills they need for a productive adult life are clearly stacked against them. The window for gaining these skills is extremely narrow, as well; if children have not learned to read by the end of Grade 3, reading to learn will be  much harder for them once they reach higher grades.

PISA has always measured proficiency against six levels, with 6 being the highest and 1 the lowest. The average for OECD countries is between Levels 3 and 4. For middle-income countries, the average falls to Level 2, while low-income countries are at Level 1 (see Figure 1).

Figure 1. Percentage of students scoring at Level 1 or below in mathematics in 18 low- and middle-income countries, PISA 2012 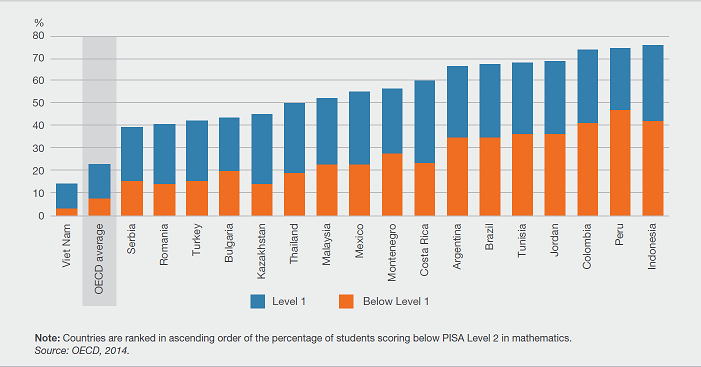 PISA-D zooms in on the lower levels

Until recently, the lack of differentiation at these lower levels limited our knowledge of what students at these levels can and cannot do. That limits analysis, which makes it harder to understand the links between low levels of learning, education policies and student characteristics. We cannot improve educational outcomes for children unless we have a more nuanced understanding of their situation. PISA-D has zoomed in on Levels 1 and 2 for close examination, making PISA more accessible and relevant to countries that need to measure a broader spectrum of performance at lower levels.

Results from the assessment will provide countries with a benchmark for comparisons – both over time and with regional neighbours – and there are already signs that participating  in PISA-D has helped build capacity to manage and use large-scale assessments at the national level. But this is just the beginning.

The next phase of PISA-D focuses on the millions of 15-year-olds in middle- and low-income countries who are out of school – students who may have dropped out, or have never enrolled at all. Whatever their circumstances, we need to know what they know.

The PISA-D team is currently developing methods to include these students in assessments, and will publish the first results at the end of 2019. The two datasets will then be merged to see how those in school compare with those out of school.

We look forward to working with the UIS and many other partners as PISA continues to expand and evolve. Ultimately, we hope that the data will be used to pursue our goal of providing a quality education to all.

Michael Ward is the Senior Policy Analyst in OECD’s Development Co-operation Directorate and the Education and Skills Directorate. He works on global educational development issues, particularly those related to the SDGs and Education 2030 agenda, and manages the Programme for International Student Assessment (PISA) for Development (PISA-D) initiative. He has 25 years of field experience in education in the Asia-Pacific and Africa regions, working with development agencies, multilaterals, bilateral government-to-government cooperation and NGOs. E-mail: michael.ward@oecd.org