In most countries, more women than men are employed in the cultural sector but they need to supplement with more than one job, according to a new fact sheet published by the UIS. Entitled “Precarious Situation for Women Working in the Field of Culture”, the report presents data to help monitor Sustainable Development Goal 8 (SDG 8), which calls for decent work and equal pay.

But studies show that a person who has more than one job most likely does not earn enough income for basic needs with the main employment. The newly-published data show that 10% of women in cultural employment hold more than one job, compared to 7% of women with jobs outside of the culture sector. Furthermore, as shown in Figure 5, in 85% of countries with data, the number of women working part-time in cultural occupations is higher than the number of men, especially in North America, Europe and Latin America.

Percentage of people employed in cultural occupations who work part-time by sex, 2015 or latest year available 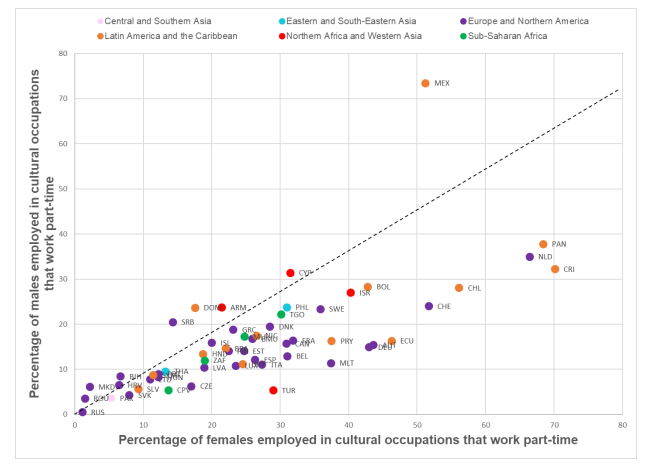 Surprisingly, workers in culture tend to have higher levels of education than in other non-cultural jobs. In 90% of countries with data, more people in cultural occupations hold a university degree than those in other sectors.