Girls are closing the gender gap in out-of-school rates at global level, but inequalities persist 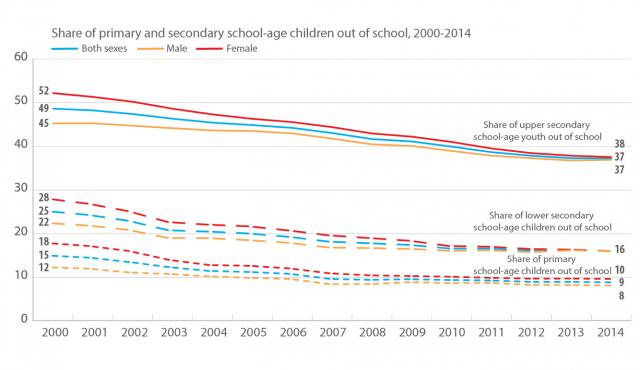 With the adoption of Sustainable Development Goal 4, governments have pledged to achieve universal primary and secondary education by 2030 and to eliminate disparities so that every child and adolescent completes quality education and learning. Can these challenges be met?

As the chart illustrates, the past 15 years saw a steep decline in out-of-school rates at three levels of education, spurred by inclusive policies and legislation. Girls in particular benefited from the global push for universal primary education.

But the data also point to a still-unmet demand for primary education. Out-of-school rates have been virtually stagnant since 2008. In real terms this means that of the 136 million children who began primary school in 2014, 38 million will leave school before reaching the last grade, according to UIS estimates. In sub-Saharan Africa and Southern Asia, where most of these children live, early gains between 2000 and 2007 are now at risk of being reversed. Poverty, isolation and inequality are barriers that require more targeted policy solutions as governments face the “last mile” of universal primary education.

The provision of quality secondary education by 2030 will also require more innovative solutions, such as “second chance” education and vocational training to enable youth to acquire the skills they need to contribute to economic growth. Young adolescents, roughly between the ages of 12 to 14, comprise 16% of the global out-of-school population and are twice as likely to be excluded compared to children. Youth (roughly 15 to 17 years-old) comprise 37% of the out-of-school population. They are less likely to have had any exposure to schooling based on the out-of-school rate from a decade ago.

What are the prospects for adolescent girls?

While the male and female out-of-school rates are very similar at the global level, this is not the case at the regional level. In sub-Saharan Africa and South and West Asia, where most of these young out-of-school adolescents live, females are more likely to be excluded from education. In West Asia, for example, 20% of adolescent girls of lower secondary school age are out of school compared to 13% of boys. In sub-Saharan Africa, the female rate is 36% compared to 32% for males.

The demand is growing for more and better data that can shed further light on those who are excluded from education and learning. To support countries confronting evermore complex challenges in targeting these groups under SDG 4, such as the measurement of learning and equity, the UIS is working with partners to develop a new generation of indicators to help countries make informed decisions that will improve the education and learning prospects of all children and youth.