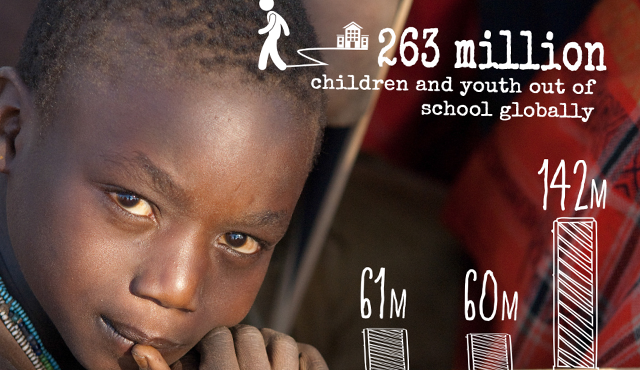 Children of sub-Saharan Africa the most excluded

In every region, older youth face greater barriers to education. According to the global average, 15 to 17-year-olds are four times more likely to not be in school than children between the ages of 6-11. This is partly because primary and lower secondary education are compulsory in nearly every country, while upper secondary school is not. At the same time, these youth are often of legal working age. Many have no choice but to work while others try to combine going to school with employment.

These new findings are produced in a paper released jointly by the UNESCO Institute for Statistics and the Global Education Monitoring (GEM) Report. The paper also reveals the vast challenges faced by the poorest children. In sub-Saharan Africa, only 65 of the poorest children for every 100 of the richest go to school according to GEM Report analysis. In Northern Africa and Western Asia, and Southern Asia, this rises to 90 of the poorest for every 100 of the richest.

Girls are more likely than boys never to set foot in a classroom, despite all the efforts and progress made over the past two decades. According to UIS data, 15 million girls of primary-school age will never get the chance to learn to read or write in primary school compared to about 10 million boys. Over half of these girls - 9 million - live in sub-Saharan Africa.

Conflict is a major barrier