It’s Global Action Week for Education, with the focus firmly on accountability. As we all know, if we want to hold our decisionmakers to account, we must have good data. Without it, we have little evidence of whether they are keeping their promises or not.

In the case of education, this certainly means knowing how many children are in school, how many are out of the classroom, and whether they are making good progress in their learning. But there is another critical area that is crucial not only for accountability on education, and that is the money. Who pays for education? How much do they pay? Where does the money go? And very importantly, who is benefiting from public spending by governments?

In the Handbook on Measuring Equity in Education, published by the UNESCO Institute for Statistics (UIS) in March, we scrutinized government spending as a way to increase equity in education. We looked at who benefits most from government education expenditure and highlighted ‘formula’ funding as a way to redistribute resources to those with the greatest need. 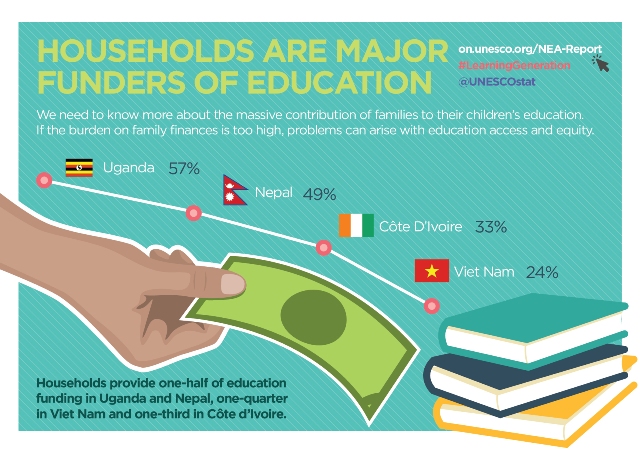 While tracking progress towards education goals signals political will to tackle inequality gaps, such as those based on gender or location, it is not enough, on its own, to help close those gaps. Another way to assess true commitment is to look at how government resources are allocated.

We know that reaching the most disadvantaged children is likely to cost far more, per head, than the spending needed to reach those who do not face the same challenges. It costs more to tackle the costs of inequities that are deeply embedded within societies.

Such problems can’t be solved by spending exactly the same on both a rich and poor child. While this would be an equal spread of spending, it would not, however, be equitable. Equitable funding provides additional resources to those who face inherited disadvantages. And it is the only way to achieve the global ambition of ensuring that every child enjoys the same opportunity to achieve their potential in education.

So, how close – or far – are countries to this ambition at present? Our findings are pretty stark: in many countries, children and young people who are the hardest to reach are often the last to benefit from government investment in education.

There are still large inequalities in the distribution of government spending on education within countries. As the figure below shows, there are vast wealth gaps in government spending within 31 low- and lower-middle-income countries in sub-Saharan Africa and South Asia for which data were available, with government spending benefiting the richest groups in all 31 countries disproportionately. In Congo, Guinea, Liberia and Malawi, children from the poorest 10% of households benefit from less than $10 for every $100 spent on children living in the richest 10% of households.

In most of 31 selected low- and lower-middle-income countries, the poorest children receive just a fraction of government expenditure on education 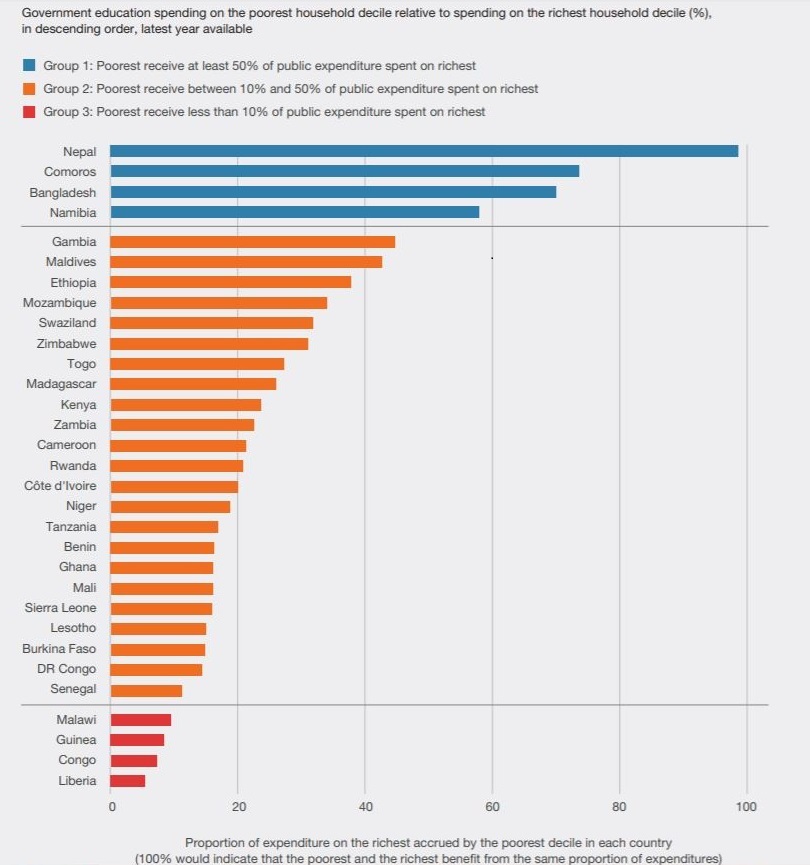 Note: As far as possible, the data have been matched for the years available for expenditure data from the UIS with the years for the DHS school attendance data, using the most recent year available. The years of data available ranged from 2005-2014. Data on government expenditure for all levels of education were analysed.
Source: Ilie and Rose (2017) based on calculations with UIS and DHS data.

We have also looked more closely at who, exactly, pays for education. The assumption may be that it is governments, but in many low-income countries, households contribute significant amounts of money to send their children to school. In several countries, they contribute 30% or more of the combined household and government funding for primary education.

To ensure more equitable spending on education, we argue for the use of ‘formula’ funding that distributes a larger proportion of resources to those in greatest need. Formula funding is already underway in some countries but is not always tackling inequities as well as it could.

For example, formulae are often based on the principle of equality of funding, with funding allocated on the basis of the numbers of children in school. But this doesn’t factor in the need to provide education to harder-to-reach children who are more likely to be out of school. By failing to differentiate between the backgrounds of students in different locations, equality of funding approaches can be highly regressive. Where they exist, formulae usually focus on access, failing to overcome wide inequalities in learning between better-resourced and the poorly-resourced schools that are more likely to educate children from the most disadvantaged backgrounds.

In Pakistan, education funding to provinces was disbursed according to their share of the population until 2009. This was a regressive funding formula, as it failed to take into account the relative deprivation of different provinces and their mixed ability to raise their own resources. To address this, four criteria have been used since 2009 to determine provincial allocations: population size, ‘poverty backwardness’, provincial revenue collection and low population density. These changes are intended to favour smaller, sparsely-populated and less-developed provinces.

Our review of current funding formulae reveals six pointers for their effective use:

National Education Accounts offer a useful way to track education finance, particularly for vulnerable and marginalised groups. For example, a USAID-funded State Education Accounts project in Nigeria found a strong bias in Kano and Zamfara states among both public and private providers to fund schools in urban areas. As a result, state planners reassigned teachers from urban to rural areas, channelled more funds to girls’ schools in Zamfara state and allocated more funds for textbooks and maintenance.

Looking ahead, there will be little progress towards SDG 4 – inclusive and equitable quality education and lifelong learning opportunities for all – unless resources are redistributed equitably, with the most disadvantaged receiving the largest share of government resources and paying the smallest share from their own pockets. While these are still early days for such approaches, there are already valuable lessons to be learned to ensure that no one is left behind in education by 2030.