Disruptions to Schooling and the Need for Recovery

Some numbers to retain:

The effects of the pandemic on children have been multifaceted and for too many, devastating. Before the pandemic, the data suggested that learning proficiency was gradually improving, though not fast enough to reach the Sustainable Development Goal 4 (SDG 4) objective of all children and young people being minimally proficient in reading and mathematics by 2030. Yet was progress was occurring. A new report by the UNESCO Institute for Statistics (UIS) (LINK to REPORT) examines the learning losses associated with school closures and considers how interventions may help children catch up.

In many developing countries the percentage of children considered proficient was increasing by 2 percentage points a year[1]. To provide an idea of the global trend, among the 130 million children of the age corresponding to Grade 3, only 73 million could read proficiently before the pandemic, but this was increasing by 700,000 a year. Each year roughly 700,000 additional children were proficient, compared to the previous year[2]. And this is counting just one school grade. This was mainly because learning improved in schools, but to some extent better school participation rates played a role.

The pandemic brought with it school closures of a scale never previously seen. At the most serious point, around March and April 2020, around 95% of children were not attending school. It has been estimated that by early November, the world’s learners had lost between 41% and 68% of the contact schooling they should have received in 2020. It has been difficult to establish precise figures mainly because once schools re-opened many only allowed learners to attend on a rotational basis[3].

Evidence has begun emerging about the impact of school disruptions on learning and confirms that learning losses are larger than what one might expect from the length of the school disruptions. This is mostly because extended interruptions are known to result in children forgetting some of what was learnt before the interruption. The new UIS report, Pandemic-related disruptions to schooling and impacts on learning proficiency indicators uses a factor of two: for every month of contact schooling lost, about two months of learning have been lost. This is in fact what the emerging research points to.

Returning to the Grade 3 example, the learning losses in 2020 are likely to reduce the number of proficient children by 13 million. If one considers eight grades of primary and lower secondary school, that comes to around 101 million children who moved below the minimum proficiency threshold as a result of the pandemic. That translates approximately to the proficiency gain made over the last twenty years.

It should not take twenty years to recover the learning lost due to the pandemic, but it will nonetheless be a long and difficult process. The UIS report finds that a return to the pre-pandemic pathway may only occur in around 2030, a decade from now. However, effective remediation can shorten this period. Recovery could occur by 2024, but only if exceptional efforts are devoted to the task.

Dropping out from school as a result of the pandemic, for instance due to economic hardships, will aggravate the problem of learning losses. It is difficult to establish statistics for dropping out at this stage, given disruptions to data collection systems and the difficulty of defining “dropping out” in a context where temporary parental concerns for children’s health can result in lower attendance figures.

While girls and boys have experienced similar disruptions and learning losses, gender gaps which were worrying already before the pandemic, may have worsened. Before the pandemic, around 85 million children who should be in primary school, were not in school, and around 55% of out-of-school children were girls[4]. The evidence suggests dropping out would have been worst among girls. At the same time, the global pattern is that boys display less proficiency than girls, mainly because the learning gained in each grade is, on average, lower for boys[5]. It is very possible that the disruptions of the pandemic will widen this performance gap between boys and girls.

The effects of the pandemic have been felt differently across the world. In sub-Saharan Africa the effects can appear to have been less severe. Around six million children at the primary and lower secondary levels fell below the minimum proficiency level. But this hides the fact that learning proficiency was exceptionally low in most of the region even before the pandemic. In this region, much of the effort will need be to directed at assisting learners performing far below the threshold, and at combatting the out-of-school problem. 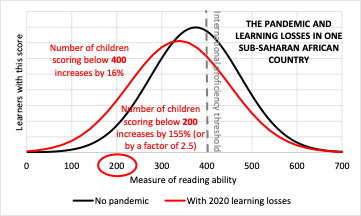 In Central and Southern Asia, numbers of children falling below the minimum level appear to have been large, at 34 million primary and lower secondary children. Regions with relatively extensive systems of pre-primary schooling will see disruptions at that level resulting in below-historical proficiency levels in later grades well into the future. This, together with high levels of school disruptions across all grades in 2020, explains why Latin America and the Caribbean is expected to recover a few years later than other regions. Losses in Europe and Northern America are estimated to have been relatively low, in part because few learners were close to the international proficiency threshold, meaning even with some falling behind, relatively few moved below the threshold. 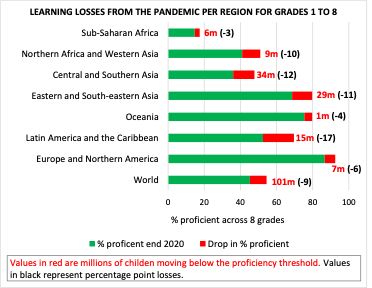 Recovering from the pandemic, and returning to pre-pandemic pathways, will require work and resources, directed in particular at the most disadvantaged children. It will also require far better monitoring of learning proficiency among children across the whole world. Even before the pandemic, the ability of many countries to gauge improvements in, for instance, reading proficiency over time, was weak. The pandemic has added urgency, and new complexities, to the task of monitoring proficiency trends.

Pandemic-related disruptions to schooling and impacts on learning proficiency indicators: A focus on the early grades UIS (2021)