On 11 February, the world will observe the International Day for Women and Girls in Science. While celebrating achievements, we must continue to focus on advancing gender equality in science and technology as women are still underrepresented in all areas, from research and engineering to tech start-ups. Pursuing gender parity in science is also part of wider global efforts to achieve Sustainable Development Goal 5 (SDG 5) while supporting SDG 9 for innovation and SDG 17 on technological capacity building in developing countries.

According to UIS data, just 29% of researchers globally are women. Breaking this down by region gives us a more nuanced view, and the good news is that we see nearly equal numbers of men and women in research positions in Central Asia as well as Latin America and the Caribbean. However, women fall far short in all other regions. For example, in South and West Asia women account for just 19% of the total number of researchers.

Examining trends in education, the oft used “leaky pipeline” expression is an apt metaphor for the sharp drop we see in the number of women scientists choosing to the stay the course – despite years of study under their belts.

As shown in Figure 1, we see that young women are actively pursuing scientific disciplines at the tertiary level. In fact, women outnumber men in attaining both Bachelor’s and Master’s degrees in science-related fields. Yet at the doctorate level, women’s participation falls to 44% of all students. And it’s further downhill from there as the share of women employed as researchers drops to just 29%, while recent evidence also shows that women have fewer offerings of tenured positions and those of similar standing.

Figure 1. Global proportion of women and men in science as graduates and researchers, 2018 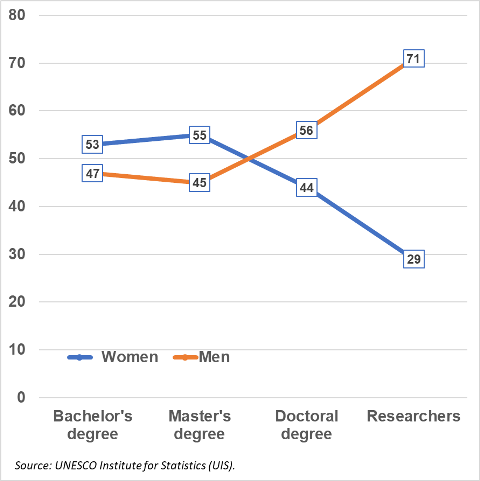 Why is this happening?

Administrative data can only take us so far in understanding the cause of this imbalance. Many countries do not have data disaggregated by sex and most do not break down the number of researchers by scientific field, for instance by natural sciences, engineering or health sciences, so it’s hard to get a complete picture of women’s participation – and the reasons they are lagging behind.

To fill this gap, the UIS has been working with the UNESCO Science sector and a wide range of countries through a project funded by the Swedish International Development Cooperation Agency (SIDA). The Stem and Gender Advancement (SAGA) is designed to help countries link data and policy to assess the roots of gender disparity in science while highlighting solutions. The first phase of the SAGA was recently completed, and discussions are underway to extend the project and reach more countries.

Through the project, countries use a Gender Objectives List (GOL) to examine the various areas where girls and women could face barriers to careers in science and to identify specific sources of gender inequality. These include:

Tools to link data to policies

Using the GOL as a foundation, the SAGA Toolkit takes the process a step further. It connects national governments, research institutes and foundations, evaluators and international organizations with different ways to link data on barriers to current policies.

The tools are easy to use. Countries begin by implementing two surveys, one on gender equality in policies and another on the drivers and barriers for women in science careers. They can then use the policy matrix tool to review their policies in a grid to identify gaps that may contribute to gender disparities.

The gender equality footprints tool looks at cross-national comparisons of policies, while the indicator matrix is a grid which lines up indicators of women’s participation in science fields, for instance the share of women nominated for scholarships and awards, against the seven objectives. By identifying where barriers are the highest, countries can adjust policies accordingly.

The pilot tests revealed that stereotypes and social norms remain the most prevalent barriers for women in science and engineering. As a result, not only are women underrepresented overall, there are also fewer women in senior positions and they are given less funding for their work.

In Argentina, for example, while women account for more than one-half of all researchers, they make up less than one-third of university department heads in science and technology and they request – and receive – 25% less funding than their male counterparts.

Clearly, we are still from the goal of a level playing field within and across countries. But with more and better data, we can steadily remove the barriers and encourage girls and women to pursue their calling as scientists and innovators.