By Silvia Montoya, Director of the UNESCO Institute for Statistics, and Vikas Pota, Chief Executive of the Varkey Foundation 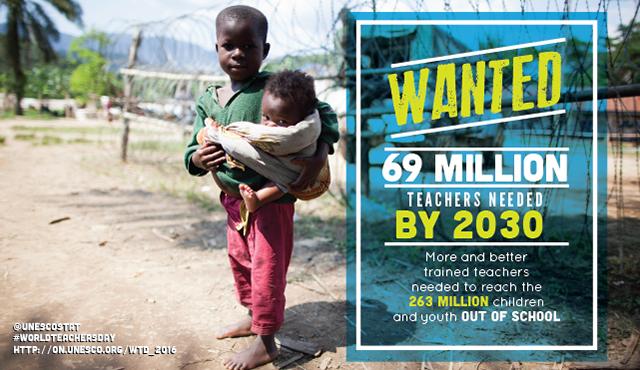 Many of us had one we will never forget – a teacher who inspired and encouraged us. We were fortunate. Millions of children today are not so lucky.

On World Teachers’ Day (5 October), the UNESCO Institute for Statistics (UIS) has released a paper setting out the first-ever estimates of how many more teachers are needed to ensure that every child is in school and learning what they need to know by 2030. In short, the world has just 14 years to recruit a total of 68.8 million teachers: 24.4 million primary teachers, and almost twice as many – 44.4 million – secondary school teachers.

Global progress could depend on, first, whether there even is a teacher, or a classroom in which to teach. Second, on whether that teacher walks into the classroom with the training, resources and support that they need to do their job. And third, on whether they are greeted by a manageable number of children instead of 60, 70 or even more pupils.

According to a new UIS paper, some developing countries are struggling to recruit and retain enough teachers to keep up with a large and growing school population. But SDG 4 demands a seismic shift in the provision and quality of teachers. The needs are urgent: we still have about 263 million children and youth out of school  globally, including 25 million children of primary-school age who will probably never set foot in a classroom. Meanwhile, just 14% of youth complete upper secondary education in low-income countries. Study after study has confirmed the importance of teachers in improving education quality and learning outcomes, which are, in turn, critical for school attendance. This is why SDG 4 calls specifically for a massive hike in the supply of qualified teachers and far more support from the international community for teacher training in developing countries (Target 4.c).

Where are the new teachers needed?

The region facing the biggest challenges is sub-Saharan Africa. Its teacher gap is by far the largest, as it will need to recruit a total of 17 million primary and secondary teachers by 2030. At the same time, it is the region with the fastest growing school-age population. It is already struggling to keep up with demand: more than 70% of the region’s countries already face acute shortages of primary school teachers, rising to 90% for secondary education. Teachers and students across the region contend with over-crowded classrooms in schools that often lack the most basic requirements, such as electricity and drinking water. According to UIS data, the average pupil-teacher ratio at primary level is 42 but rises to more than 60 in countries such as Central African Republic (80), Chad (62), Ethiopia (64), and Malawi (61).

Other parts of the world face their own grave challenges. War in Syria and Iraq, for example, has destroyed large parts of the education systems in these countries, and has had a knock-on effect on neighbouring countries trying to cope with an influx of refugees. According to the Syrian Ministry of Education, the number of teachers within Syria almost halved – falling by 46% — between 2012 and 2016.

Are countries on track to close the teacher gap?

Some countries are on track. Myanmar, for example, has been increasing its recruitment rate by an average of 2% per year since 2007. If this growth continues, it should be able to accommodate all primary school-age children by 2018, while maintaining its average pupil-teacher ratio of 28:1.

Yet if current trends continue, 43 of the 102 countries facing the biggest challenges will still not have enough teachers in 2030. Unless something changes, more children will need primary teachers in 2030 than today in Cambodia, Central African Republic, Chad, Lesotho, Mali, Pakistan, Senegal, and Uganda.

The challenges are even greater at the secondary level – with more teachers in three out of four countries globally. Of the 139 countries facing the biggest gaps, 73 will not have enough teachers to achieve universal secondary education until after the 2030 deadline. More than 60% are in sub-Saharan Africa. If current trends continue, more children will need secondary teachers in 2030 than today in Burundi, Central African Republic, Kenya, Malawi, Mozambique, Seychelles and Uganda.

What needs to happen?

Improving education quality is not just about having enough teachers: many thousands of teachers have been recruited in countries where primary education systems have expanded rapidly, but they do not always meet minimum qualifications and training standards in their countries. According to UIS data, in 31 of 96 countries with data, less than 80% of primary school teachers were reported to have been trained to national standards in 2014. Again, more than half of these countries are in sub-Saharan Africa.

We need to find ways to keep teachers in the profession. By providing competitive salaries and a supportive school environment, countries can motivate those who are already in the profession and attract new recruits. Teachers also need to be motivated, supported, well trained and willing to continually improve their teaching approaches.

The new UIS estimates confirm the urgent need for millions of additional teachers to propel the world towards its education goals. Looking beyond the sheer quantity of teachers, there is also a pressing need for teachers who are well-trained, well-supported and commensurately paid.

To learn more, download the new paper and explore the data in the eAtlas of Teachers, presenting a series of interactive maps and charts that can be easily shared and exported.