The fundamental importance of science, technology and innovation (STI) has never before been so apparent as during the global COVID-19 pandemic. Crucially also however, is the need to further harness the advances in STI to support the global recover from the pandemic, to tackle the tremendous socio-economic crisis triggered by it, and to fast-track progress towards sustainable development.

As part of the Sustainable Development Goals (SDGs) Agenda 2030, countries have pledged to “build resilient infrastructure, promote inclusive and sustainable industrialization and foster innovation”. In particular, SDG Target 9.5 calls upon nations to encourage innovation and substantially increase their numbers of researchers, as well as public and private spending, on Research and Development (R&D). The UNESCO Institute for Statistics (UIS), as the custodian agency, collects data and produces two key indicators to monitor progress towards this SDG target – i) SDG 9.5.1 R&D expenditure as a proportion of GDP and ii) SDG 9.5.2 Researchers (in full-time equivalent) per million inhabitants.

The UIS has just updated its global database on R&D with most recent country level data for the two global indicators. Overall, data are available for 155 countries and territories for the period of 1996-2020. This release specifically includes new country-level data for 94 countries for the reference years 2019 and 2020, as well as updated time series data and regional averages.

According to the latest data, global investment in R&D has continued to grow despite the drawbacks in the global economic situation due to the pandemic. It represents an average annual growth rate of 4.7% over the last decade (2010-2020) when adjusted for inflation, though there was a slowdown in 2020, where global R&D went up only by 3%. This investment in R&D may have played an important role in surmounting the challenges faced in the current global pandemic.

In relative terms, the proportion of global GDP invested in R&D has significantly increased from 1.61% in 2010 to 1.93% in 2020. However, a wide difference between the various regions of the world continues to prevail. Europe and North America, and Eastern and South-Eastern Asia spent 2.62% and 2.31% of GDP on R&D respectively, representing the highest level across the regions. Most of the developing regions fall short of the world average, spending less than 1% of GDP on R&D. Developing regions spend ranges from 0.90% in Northern Africa and Western Asia, to 0.32% in sub-Saharan Africa (see Figure 1). This (investment in R&D less than 1% of GDP) is the case for approximately 70% of countries where data are available.

Figure 1: Regional trends on R&D expenditure as a proportion of GDP, and Researchers per million inhabitants 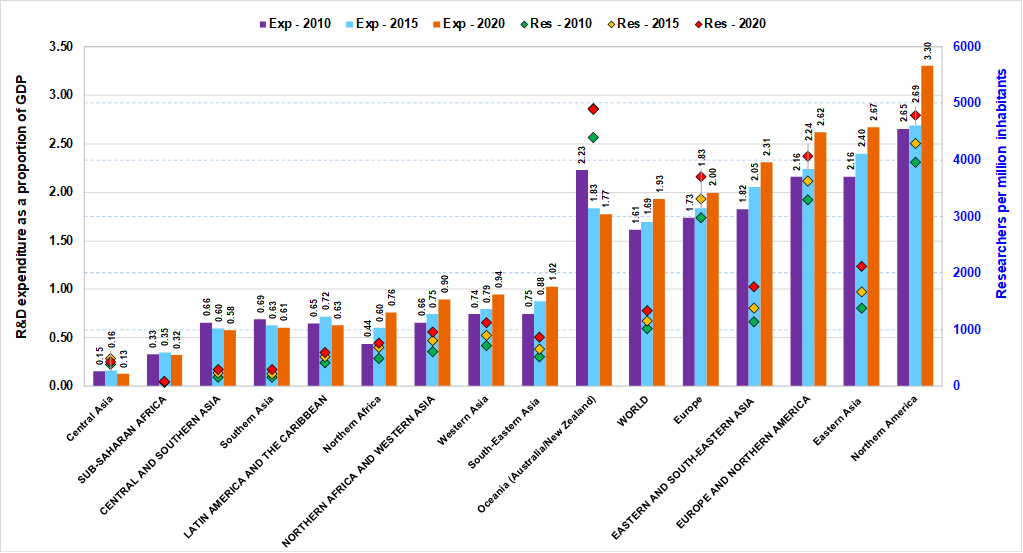 In addition, most of the countries where data are available for 2019 and 2020, display significant growth in their R&D expenditure as a proportion of GDP in the last year. However, data further show that these increases are not necessarily due to increased investment in R&D during this period but because of substantial decline in GDP, where growth in R&D investments have outpaced the growth in national economies. This suggests for a cautious interpretation of change in R&D expenditure as a share of GDP within the context of the global pandemic.

Figure 2: Trends in R&D expenditure as a proportion of GDP, in selected countries 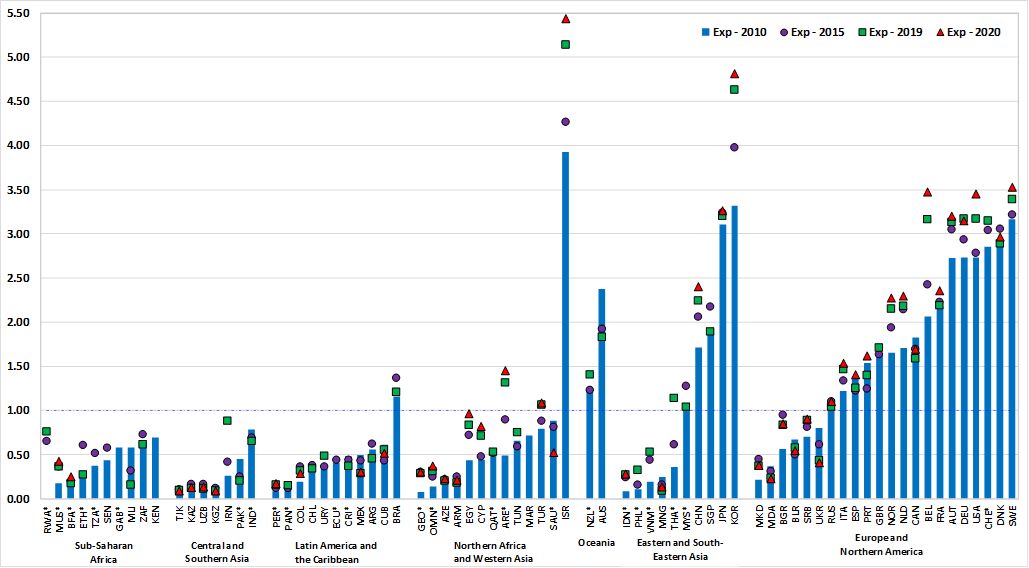 The regional situation regarding this indicator also showed wide disparities across the regions following a similar pattern to that of the regional trends in R&D expenditure. In Europe and Northern America, the increase was far more than the world average, with 4,062 researchers per million inhabitants, whilst in sub-Saharan Africa, the figure is as low as 98 researchers per million inhabitants. The other regions stand at: Eastern and South-Eastern Asia (1,763), Northern Africa and Western Asia (963), Latin America and the Caribbean (614), and Central and Southern Asia (308).

The new data are based on the UIS 2021 R&D Statistics Survey as well as statistics obtained from UIS partners, notably the Organisation for Economic Co-operation and Development (OECD), the Statistical Office of the European Union (Eurostat) and the Ibero-American Network of Science and Technology Indicators (RICYT).

These data, including time series data, are available in the UIS Bulk Data Download Service (BDDS). However, please do note that the data published on UIS Data Portal are still from the March 2021 Data Release. This will be updated in the coming weeks with the most recent data for the two SDG 9.5 global indicators. The data will also be featured in the United Nations Statistics Division’s (UNSD) SDG indicator database, as well as in numerous indices, databases and reports.