How Much Does your Country Invest in Research and Development (R&D)? 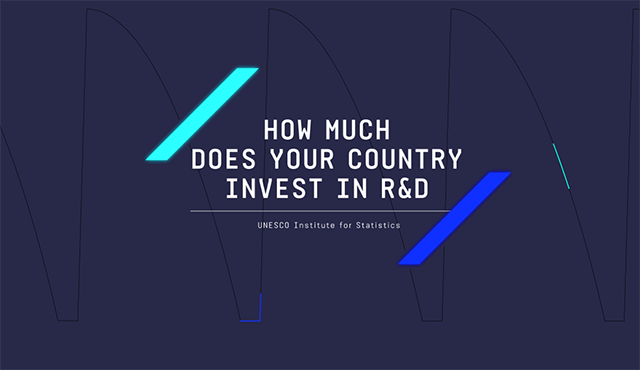 As the pursuit of the Sustainable Development Goals (SDGs) gathers momentum, there has been a lot of noise about the ‘big ticket’ factors seen as fundamental for their achievement: immediate and sustained action, political will, adequate resources, equity … the list goes on. And it’s true. We need all of these and more. But there has been less clamour about the role of innovation, even though this will fuel progress on each and every SDG. And there has been barely a whisper about its foundation: research and development (R&D).

SDG 9 calls on governments to promote sustainable industrialization and innovation by ramping up spending on R&D and increasing the number of researchers for every one million inhabitants. As world leaders gather for the UN General Assembly,  the UIS is releasing the data, which reveal some surprising results in a new interactive tool: How much does your country invest in R&D?

Indicator 9.5.1 on R&D spending is critical. The question is what to measure: the amount of R&D spending, or R&D spending as a proportion of GDP, or both. We argue that it is vital to ‘go relative’ to get a true picture of what is happening. If we look at the top five R&D performers in absolute terms (R&D expenditure), they are all – not surprisingly – large economies:

But when we look at relative data – R&D expenditure as a percentage of GDP – the ranking changes dramatically.

Regions have been setting their own spending targets for some time: the best-known being the EU target to raise overall R&D investment to 3% of GDP by 2010 – a target that shifted to 2020 when the 2010 deadline was missed.

It’s an ambitious goal: as the data tool shows, only six countries worldwide have managed to surpass the 3% target, including three in the EU: Denmark, Finland and Sweden. They lag behind Japan with 3.6% and Israel with an impressive 4.1%. And all of them trail behind South Korea – the world leader – with 4.3%. Austria, Germany and Switzerland hover around the 3% target, as does the biggest spender of all in absolute terms, the United States.

Few countries in other regions compete with these proportions. In Central and Eastern Europe, Slovenia is out in front, with 2.4%, but the region’s ‘giant’ – the Russian Federation – manages only 1.2%. In Central Asia, the figure hovers around 0.2%, as in the case for Kazakhstan. Morocco tops the league in the Arab States with just 0.7%. Brazil is the leader in Latin America, with 1.2%, while India leads in South and West Asia with 0.8%. In Africa, the target set by the African Union is 1%, but only Kenya, with 0.8% and Mali and South Africa, each with 0.7%, come anywhere near the goal.

R&D investments in some middle- and low-income countries have been accelerating and are, in some cases, gaining ground on those seen in high-income countries. This is particularly the case in East Asia where a regional hike in R&D spending is really all about one country: China. As our data tool shows: China’s R&D spending may amount to only 2% of its GDP, but this means that the country is pouring around PPP$369 billion into this sector each year.

What’s more, China is achieving an astonishing average annual growth rate of 18.3% in R&D spending, compared to just 1.4% across the rest of the world’s upper-middle-income countries. As the share of global R&D expenditure by high-income countries fell from 88% in 1996 to 69.3% by 2013, China alone filled that gap, increasing its share from 2.5% to 19.6%. This means that China is now hot on the heels of the United States, which accounts for almost 30% of total global R&D expenditure.

Another surprise emerging from the data tool is the critical importance of the business sector. Business adapts to local circumstances, and is, by far, the major contributor to R&D in every R&D-intensive country. In developing countries, however, the contribution of the business sector is far more limited. To put it simply, it looks like the sector is too busy with non-R&D activities, such as technology transfer and reverse engineering (taking a product apart to see how it works and can be adapted, etc.), to make significant investments in specific R&D.

Globally, there were almost 1,083 researchers for every one million people in 2013, and more than half of the world’s R&D expenditure pays the salaries of R&D personnel. However, the average annual growth rate for the number of researchers lags behind the rate of R&D investment overall, at 3.2%, compared to 4.9%. And while the global distribution of researchers in 2013 was similar to the distribution of R&D expenditure, the share of researchers in middle-income countries, excluding China, actually fell from 17% to 15% between 1996 and 2013 – a worrying downward trend with global implications.

Automatically updated with the latest available data from the UIS, this tool is designed to help policymakers, researchers and journalists visualize key trends and benchmark a country’s commitment to R&D from a global perspective while still making comparisons across a particular region or income group. Looking ahead, it will serve as a valuable resource in contextualizing and informing some of the key issues that will be addressed at the next World Conference of Science Journalists (October 2017, San Francisco, US).